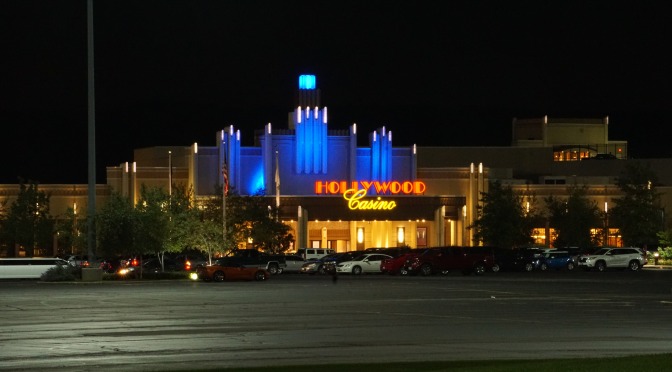 Is that really the title of this post?  Yes.  Yes it is.  I put that down, assuming something more cleaver would come to me by the time I was done.  And yet, here we are….

We were now really ‘booking it’ to head west again.  Chicago was the last stop we had specific plans for, as the guys were headed for their last baseball game there: Toronto Blue Jays @ Chicago Cubs.  Dale, as a Jays fan, had been looking forward to this game!  (Not to mention, he had a number of players from both teams on his fantasy baseball team).  You probably belong to one of two crowds – those who know what fantasy sports are, and those who are lucky.  Kidding, kidding.  Sort of.

Our destination was a casino RV park just south west of Chicago (in/near Joliet).  It was full hook-ups for only $35/night, plus it included the hot continental breakfast made up by the casino hotel.  Sweet – no cooking or dishes for us!

We were probably a little over half way between Pittsburgh and Chicago when Sherri texted asking if we could call and cancel their first night Chicago.  I’ll let her tell you about their “adventures”!

Well, turns out it was simply our turn for some car drama. I had noticed when we parked at our last campground that the back end of the car was WAY low and the front WAY high. This was new! And clearly a bad thing. There was discussion as to what we should do, but I’m going to spare you that look into marital “conversations”. (See? Real life happened on this trip too!)

Blah, blah, compressors, blah, blah, suspension…. We hooked up the trailer, noticed everything was up and even again, crossed our fingers, and took off for Chicago.

First gas stop and, sure enough, the back end was dropped again and my tension level was running high. I am not a fan of wrecking our car and I really wanted to know what was going on. I got on the phone and found a dealer in Cleveland and we headed that way.

Now, this was obviously a stressful thing. We had a long drive ahead of us, Erick had a game waiting for him the next day and it was looking like we would have trouble getting there. BUT! This little stop in Cleveland was just what the psychiatrist ordered for me. I needed the break. We unhitched the trailer in the back of the dealer parking lot and waited for the techs to diagnose our issue.

It was like our very own waiting room complete with WiFi since we could reach the dealer WiFi (bonus!). I believe it was the New Hampshire post I was able to get out while sitting here. I opened the windows, made some sandwiches for lunch and sat down to relax. We were there for 3 hours and I’ll admit, strange as it sounds, I kept wishing we could just stay there for night. I really enjoyed that stop! And I’ve since thought about how much I prefer that waiting room. It’s probably overkill to take the trailer to our next doctor appointment so we can just wait in there, eh?

Anyway, they thought they found the problem, we kept going, blah, blah, diagnostic tests,  blah, blah, stopped for gas, problem persisted. Dang it! Back on the phone to find another dealer along the road.

Long story a bit shorter, we ended up spending the night at our 3rd Nissan dealer of the day. We had made it to Chicago, but still needed to see the service dept. first thing in the morning so we pulled into the dealer and drove around the back to a dark lane and parked for the night. Again, SO glad our beds were just behind us. 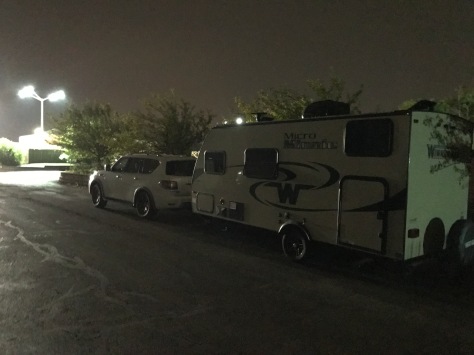 There was a bit of concern about whether or not we were going to get in trouble, but we were fine. And come morning it was a lot less concerning. Daylight always helps. 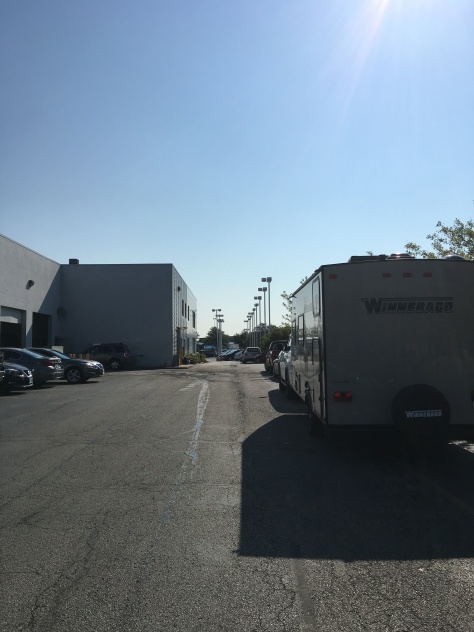 Unfortunately, our car troubles persisted till we got back to Canada. Our help along the way did alleviate some of the dropping that was happening, but we were reassured it wasn’t going to wreck the car so on we went.

Meanwhile, we had made it to the Casino on the first night, and I was pleasantly surprised to find it was less black-top-parking-lot-ish than I’d been expecting.  The Casino’s hotel and the RV park were also both set off a little way from the actual Hollywood Casino.

This was probably the first location that we actually noticed the bugs.  Okay, not entirely true – we saw bugs everywhere.  This was the first place where they were the biting kind!  There were no fire pits in these sites, and so we felt no real need to hang out outside that evening anyway.  An early night in bed, and some time to partake in the 60-something ‘over-the-air’ tv channels we were picking up so close to the city.

The next morning we headed over to the hotel for their free (to hotel AND rv guests) breakfast.  Dale took the kids back to the trailer, and I stayed in the lobby to do some laundry and enjoy some Wi-Fi.  Anytime we mention looking for Wifi along the trip, there’s the understanding that we want to upload pictures to use on this blog.  We’ve been pretty sorely disappointed in most locations.  Either the wifi doesn’t work, doesn’t exist, or isn’t strong enough to load pictures (only webpages).  This was the case at the hotel.  I did enjoy a little time surfing the web, I’ve been pretty “off the radar” otherwise!

By the time I got back to the campsite, Herrera’s had pulled up and the guys were getting ready to head out to their last game.

I hadn’t quite finished all of my laundry, and Sherri had some she wanted to throw in as well, so we pretty much spent most of the afternoon going back and forth to the hotel’s one washing machine to get it done.  We drove each time, which almost felt ridiculous because it was a 30 second drive, but it was soooooo hot out and the walk was more like 4 minutes (lol??!?!)!

The kids played around outside for a bit, but as the day got hotter they crept to the shade of the awnings, and eventually inside to the AC.

Mid-afternoon we put on a movie for everyone, but even that was only a small distraction for squirrely kids.

Somehow, during this last baseball game, we felt the ‘longness’ of the day without the guys there.  Maybe because it was an afternoon game?  Eventually, though, it was time to make supper and Sherri and I made up a buffet of sorts.  It was easy, it was yummy, it had chips (happy kids!), it had nacho cheese (happy moms!).

Meanwhile, the guys were enjoying one last Walmart park/Uber ride to their final game.

Apparently there was also some big Air Show in town the weekend we were there.  The guys got to see a small portion of it, as the jet planes would zoom overhead every now and again. 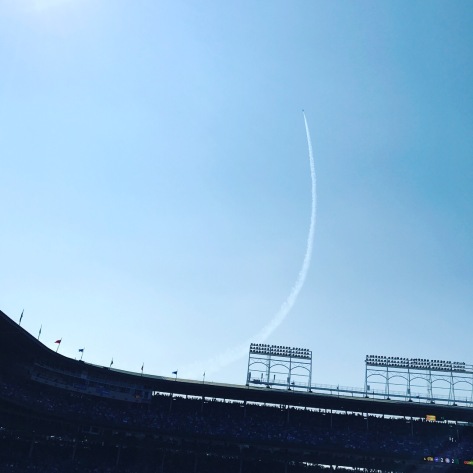 In each city the guys made it their mission to eat either something “highly rated”, or “classically known” (ie – in Philadelphia one must have a Philly Cheese Steak!)  So, of course, after the Chicago game they went for deep dish pizza!

If anything, Dale is known for his very serious nature.  (See!!  I told you if it existed, I would use a “sarcastic font” a lot!)  I returned from the bathroom that evening to find the guys were back…..and Dale had been Walmart shopping:

It was his ultimate goal to scare our boys, and so he hid in the bushes while I called the boys out of bed to “finish cleaning up their dinner plates”.  Hilarity ensued.  Okay, mostly just the grown-ups laughed.  If you can’t make fun of your kids, who can you make fun of?   Ahem….

Seeing our continent, one kilometer at a time.